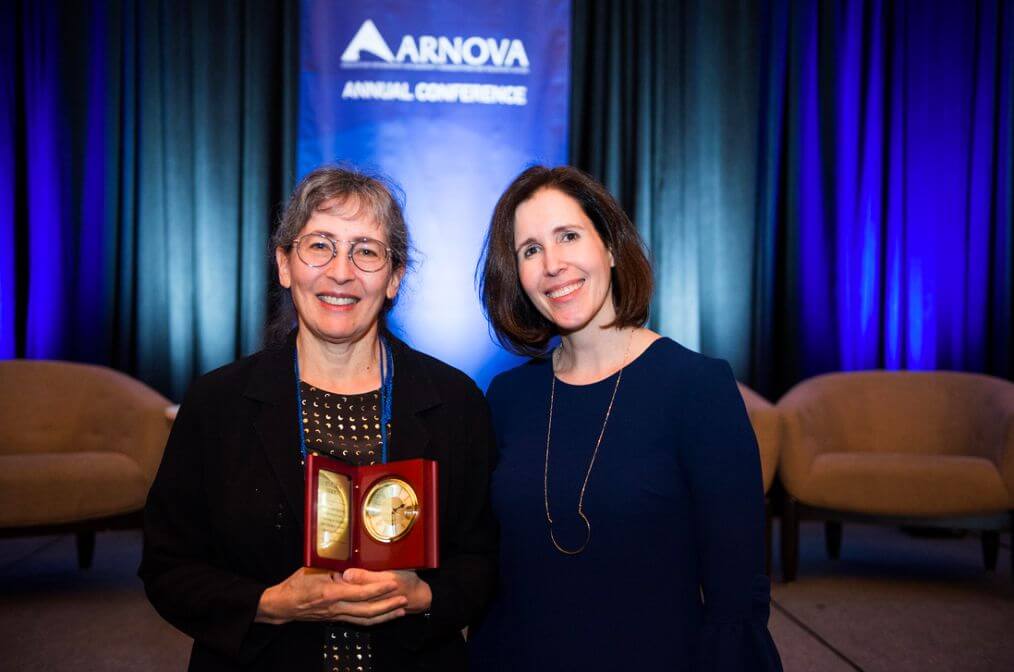 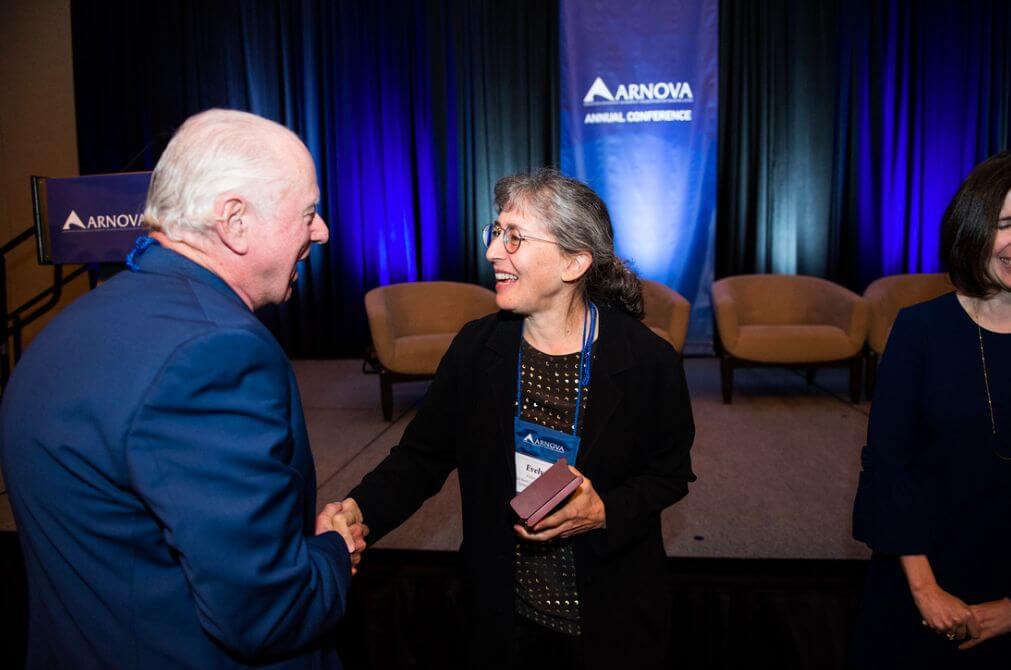 Thank you so much, Dana [Brakman Reiser], for your gracious introduction and recitation of my contributions to the field of nonprofit studies.

I still haven’t gotten over the news that ARNOVA is granting me this prestigious award – but I had no idea until ARNOVA published the conference schedule that many of my colleagues organized panels reviewing my scholarship and other activities in helping build the field of nonprofit law.  As I contemplated the out-of-body experience I’m having here, it came home to me the truth of the sentiment that no accomplish is singular – that we collectively inform and inspire each other’s work.  I simply cannot imagine my professional career without my membership in ARNOVA.  Because I literally “could not have done it without you,” I gratefully accept this award from ARNOVA as a tribute to ARNOVA.

I joined a law school faculty in 1992 after practicing law and serving as an attorney-adviser in the Office of Tax Policy at the U.S. Treasury Department.  So at the start I very much considered myself a pracademic.  I quickly appreciated that I was catching the wave of an emerging academic field, combining multiple strands of law and multiple disciplines beyond law.  I sought out the precious few nonprofit-law experts in the legal academy – Harvey Dale, John Simon, Joel Fleishman, Henry Hansmann, Marion Fremont-Smith, and Laura Chisolm – and am grateful for their mentorship.

But I quickly realized that nonprofit law does not exist in an academic vacuum, and, honestly, dumb luck blessed much of my early scholarly development.  Most fortuitously, the Program on Non-Profit Organizations at Yale University had recently published the groundbreaking multidisciplinary nonprofit scholarship volume The Nonprofit Sector: A Research Handbook.  As a non-PhD, I taught myself the state-of-the-art scholarship in each of the component fields by reading every chapter and every article cited in every chapter.

And then I found ARNOVA.  At my first conference, in NYC in 1994, I felt like I’d entered Aladdin’s Cave – so many glittering jewels!  So many eminent scholars, in a profusion of academic disciplines, all doing foundational research in enhancing our understanding of nonprofit organizations and their stakeholders.  Professionally, I felt that I’d finally come home.  This year would be my 25th consecutive ARNOVA conference, except I missed 2014, when my mother-in-law died two days prior.  I’ve been delighted to give back to the Association, including having the honor of being elected to two terms on the ARNOVA board.

To all the early scholars out there, I encourage you to make as much use as possible of your membership in this extraordinary community.  In your search for assistance, collaborators, guidance, and mentors, you will find, as I did, that altruism is not only studied by ARNOVAns, but also is actively practiced.  It’s easy to make connections at these annual conferences – just don’t stop there.  After you introduce yourself to scholars and practitioners you admire, ask if you can send them your drafts.  Allow your scholarly agenda to flow in serendipitous directions – and be grateful when luck brings you an unexpected project.  My big early break came in 1995, when I was invited to be a discussant at a conference at Yale, at the suggestion (I later learned) of an economist to whom I’d sent a draft paper (thank you, Avner Ben-Ner!).  When I read the agenda for that conference, my reaction was that I recognized every name but my own!  Perhaps you too will find yourself working with other ARNOVAns on multi-disciplinary projects that expand your own discipline’s understanding of important questions.

My collaborations with non-legal ARNOVAns allowed for fruitful scholarship, in both directions.  To my delight, for example, I explored all the various dimensions of property-tax exemption for charities, not by pretending to be what I am not trained to be, but rather by editing a book whose chapters were written by my dream team of leading scholars in their fields (including our too-soon lost colleagues Peter Dobkin Hall and Woods Bowman).  This was the first of many scholarly collaborations with the Urban Institute – thank you, Elizabeth Boris, Gene Steuerle, and Joe Cordes!  Separately, when ARNOVA recently met in Chicago, Dana Brakman Reiser and I co-organized a symposium at my law school on charity regulation around the world, taking advantage of the attendance at ARNOVA of legal scholars from outside the United States.

In turn, I was thrilled to be invited to contribute chapters to books edited by non-legal ARNOVAns Put Barber; Elizabeth Boris and Gene Steuerle; Gene Steuerle and Joe Cordes; Lester Salamon; Helmut Anheier and Avner Ben-Ner; and Dwight Burlingame.   My scholarship was greatly informed by fellow chapter writers Alan Abramson, Joe Galaskowitz, Kirsten Gronberg, David Hammack, Francie Ostrower, Steve Smith, and Dennis Young, among many others.  Without ARNOVA, I never would have become known to the editors of the second edition of The Nonprofit Sector: A Research Handbook: My contribution was a new chapter on, basically, “laws other than tax’” which complements the classic chapter on tax-exemption.  Imagine that: from a newbie acolyte of the first edition to a chapter author in the second!  (Thank you, Woody Powell and Rich Steinberg!)

When I first joined ARNOVA, the membership included few legal academics–- now we fill more than one table at lunch, and multiple panels.  We so appreciate your providing an annual forum for an expanding international group to explore the disparate legal subdisciplines that collectively constitute “nonprofit law.”  Tax, corporate, trust, and constitutional lawyers get lost in their own professional associations and conferences.  Our panels at ARNOVA have given us collaborative opportunities to present drafts of book chapters and symposium articles – including the panel this morning of chapters from the new comprehensive international “Research Handbook on Not-for-Profit Law” edited by the University of Melbourne’s Matthew Harding.  But there’s a price to pay: It’s getting hard at ARNOVA meetings to keep up with my old favorite economists, historians, sociologists and political scientists, and hearing from new ones!

Most gratifyingly, while I do not have the pleasure of mentoring graduate students, I am still blessed with progeny!  I am profoundly moved to see in this room so many legal scholars whose career I had the joy of nurturing.  My hat’s off to Dana Brakman Reiser, Debra Morris, Oonagh Breen, Rob Katz, Adam Parachin, Lloyd Mayer, and Johnny Rex Buckles – so quickly grown up!  The lively and exciting field of nonprofit legal scholarship is in excellent hands.  In the coming days, you’ll be able to hear from these and more senior legal scholars – Mark Sidel, Norm Silber, John Tyler, Linda Sugin, and Terri Lynn Helge – my apologies for not having the time to name all of you!

Finally, I share this award with my husband, Jack Siegel (who is here giving me moral support today).  Without Jack’s inestimable substantive counsel and unfailing support for the pressures of academe, my accomplishments would not have been possible.

The honor I receive today from ARNOVA is the capstone of my academic career.  To my many dear friends here – giants on whose shoulders I stand; peers; and emerging scholars in the study of nonprofits – I say thank you for the opportunity to say “thank you.”  Thank you with all my heart.

I will be retiring from Chicago-Kent College of Law after teaching Income Tax Law one last time this spring – allowing me to devote myself full-time to a different creative endeavor.  In the last few years, I’ve returned to my childhood love for drawing and painting.  It’s been fun as well as challenging to start over near the bottom of the learning curve – and I’ve been fortunate to find another welcoming community of teachers and like-minded students.  To my amazement and delight, my pastels have been juried into local and national shows and won awards – and, as we speak, my first solo show is hanging in a Chicago gallery.  Let me leave you with a few images of pieces from that show.